The Golden Horde programme intends to network multiple munitions, such as precision glide-bombs and decoys, so that the weapons can exchange information and swarm targets in unison. The first demonstration of the technology in December partly failed due to a software problem.

“Just last week, we took the next step from looking at two collaborative munitions to four collaborative munitions that successfully hit four separate targets all at the same time. This was a great step forward in this programme,” says Brigadier General Heather Pringle, commander of AFRL, during a press conference at the Air Force Association’s Aerospace Warfare Symposium on 24 February.” 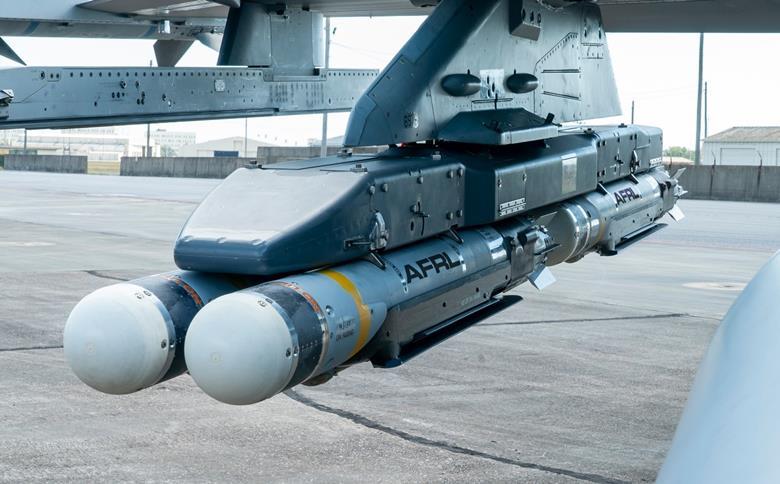 The programme had so far focused on networking GBU-39/B Small Diameter Bombs and Miniature Air-Launched Decoys. The Small Diameter Bomb is a 110kg (250lb) munition with pop-out wings that allow it to glide more than 40nm (75km) to a target. During its journey to its initial target, the Golden Horde variant of that glide bomb – the Collaborative Small Diameter Bomb – is supposed to look around, share information with other collaborative bombs and then decide if better objectives are available for striking.

The research laboratory has been debating whether it should focus Golden Horde on a limited number of weapons or if it should build a technology to allow any weapons maker to design collaborative weapons. It is not clear if such a technology would be integrated into new weapons or would be a retrofit like the Joint Direct Attack Munition kit that converts unguided bombs into precision-guided weapons.

“Moving ahead what we are looking to do is a beginning phase of an open collaborative autonomy architecture,” Pringle says. “This government-owned reference architecture is really going to be an environment where more players can come and compete their own versions of what autonomous collaborative weapons should be.”